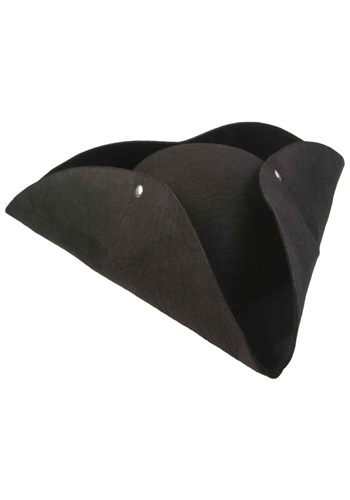 A pirate hat is ESSENTIAL for any pirate captain costume. We'll explain why. Think of the most recent pirate movie you saw, think of every pirate movie you've seen. Now think of the main pirate in the movie, the captain. What's on their head? A hat! All pirate captains wear tricorn hats. It's a fact. Sure, there might have been a few pirates in the movie that didn't have some kind of headwear, but they are never main characters, It's always supporting roles or extras. No, if you want to be a true pirate captain, you will need the hat.

This tricorn hat is the first step on the road to becoming a fearsome pirate captain! It's made of felt and has metal buttons on the brim that both help it stay together and help it look totally awesome. This works perfectly for both pirate and settler costumes!

Looking to give your pirate hat a little extra flair? Stick some feathers in it or add some beads! Personalize the hat, so that when people see the feathers on your hat, they know that it's the bloodthirsty pirate captain (insert your name here).