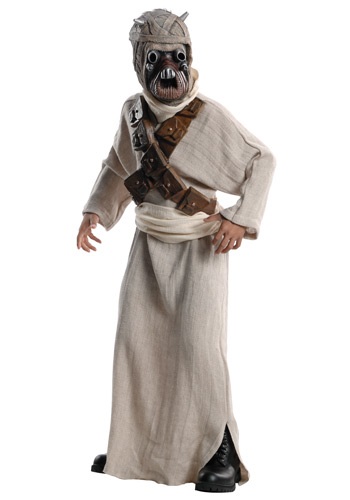 "A moisture farm? Poor locals never stood a chance. The Sand People think all water is sacred and was promised to them."

Okay, so not much is known about Tusken Raiders, but we are going to list everything that we know about them! Here we go: The first thing that is known about Tusken Raiders is that they are informally known as Sand People. They ravaged Luke’s hometown on Tatooine, and killed his aunt and uncle – they are also a native species of Tatooine. They are very territorial of their land and are predominately xenophobic. You probably knew all of that, since it is basic knowledge! However, you may not have known that they believe that water is theirs, as it was allegedly promised to them. Their favorite food is black melon, which is grown in the Jundland Wastes. Maybe you knew both of those too, but did you also know that black melons are a great and reliable source of milk – it’s okay if you didn’t, we were surprised too!

Anyways, even though Sand People are a little murderous and they do kill some people, but maybe they are misunderstood, or maybe they just look really cool and would make an awesome Halloween Costume! This is a Deluxe Kids Tusken Raider Costume features a Tusken Raider from Star Wars and is great for any occasion, and can be paired with more Tusken Raider costumes, more Star Wars costumes, or you can just wear it alone to stand out from the crowd!