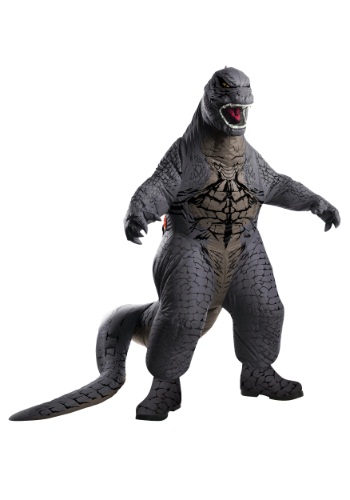 Monsters come about in many epic ways. First, there's the classic werewolf epidemic. One bite and your fur-free human life is done for, you're a werewolf now. Your weekends will be spent roaming through the woods and howling at the moon at least once a month. Then, there's Frankenstein's monster. Created by one man and a bolt of lightning, after the way the villagers reacted to his presence we probably don't have to worry about his green-hued presence becoming a trend.

Here's the thing, no monsters can beat the epic arrival of the destructive immensity of Godzilla! He emerges to torment Japan after they awaken his prehistoric slumber with Nuclear testing. He raises buildings and causes destruction on a scale that's incomparable to any other monsters. We don't think King Kong can even compete, we never saw him take down whole neighborhoods!

With all this epic destruction, the potential for this inflatable suit is great. Set up giant Lego villages and watch as your very own child-size monster takes them down. If you really want to amp things up, recruit a friend or sibling to dress as King Kong. That's sure to make routine squabbles much more entertaining!

Your child is sure to win at Halloween this year when you inflate this windbreaker fabric suit with the small fan that simply clips onto clothing worn underneath the costume. Once your child steps into the jumpsuit and zips up they'll feel fully transformed with a long, twisted tail, boot covers to conceal their shoes, and a roaring face to put fear into the hearts of the whole neighborhood! Move over monsters, Godzilla is on the scene!