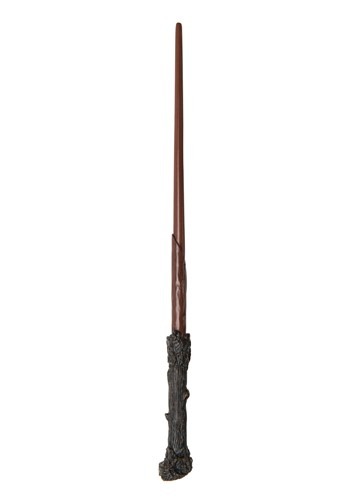 While Mr. Ollivander contests that the wand chooses the wizard and that it's not always clear why we'd like to argue differently. We believe, if you know enough, you can always understand why the wand chose its wielder. For example: Harry Potter's holly and phoenix feather wand, couldn't be any more appropriate!

A holly wand is best with owners that face a dangerous and spiritual quest; it's considered protective and helpful for people that need to fight a quick temper and rash decision making. A phoenix feather core can display the greatest range of magic, though it can be slow to reveal its ability. This same wand can show initiative and act of its own accord, which we know can be extraordinarily helpful. There's no one better suited to wield this rare wand than Harry!

Complete your wand collection or Harry Potter costume with this Deluxe Harry Potter Wand! Designed to look just like the wand from the films, this officially licensed accessory looks ready to cast a spell. Measuring 14" long, this plastic wand is durable and ready for use or display. Don't wait for a wand to choose you; choose Harry Potter's wand and know you are ready for any magical event.

Chances are Harry Potter's story would have gone much differently if he possessed a different wand. The rare combination of holly and phoenix feather proved stronger than even the Elder Wand. It only makes sense that even a Muggle would want to own such an awesome wand!