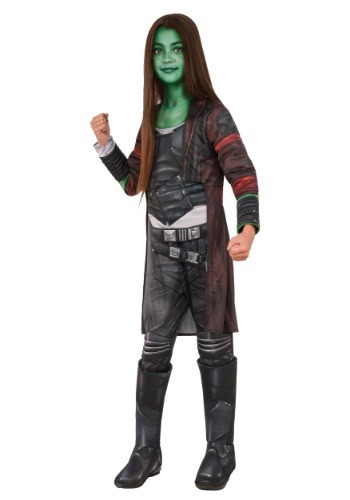 Who's the coolest girl in the whole wide galaxy? Well, it's your little lady, of course! Your girl is top notch, all awesome, a kiddo who is truly to be admired. But, and we're not saying it's a competition here, but there's another woman who's probably almost as cool as your girl. She's green, she's tough, she's Gamora from Guardians of the Galaxy.

Lots of fans agree that Gamora is the bomb, and if your girl thinks Gamora is pretty great, too, then there's a little something special we can do for her this Halloween. That's right, it's time for her to become Gamora with this Child Deluxe Gamora Costume. From Rubies Costume Company, this outfit is officially licensed, and comes in the character's signature style.

The ensemble comes as a fully printed jumpsuit that has a jacket attached. It also features attached bootcovers for the head to toe effect. It also comes with a belt, and of course, a makeup kit. Because one of the things we know about this Marvel Superhero is that she is green. You can use the included kit to give your girl a green face, but that part is optional. She'll be a real great Gamora either way!