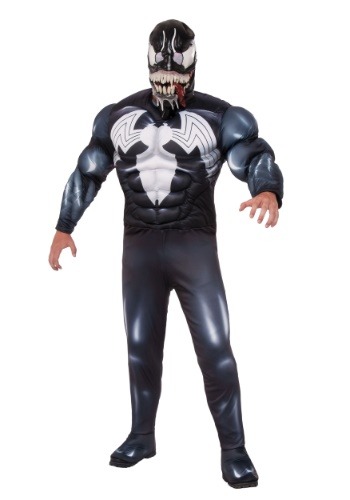 Ready to step into the ring as Venom? Alright! Now, we have to make sure you're fully informed here, becoming Venom doesn't even involve finding the alien symbiote to transform you into a wicked villain. Not in our world, at least! For our version of Earth, all you gotta do to become Venom is to slip into our Adult Venom Costume. You'll look just like the arch-villain of Spider-Man and renowned Marvel Comics baddie with this costume style. And, yes, while it doesn't come with the powers and abilities of the real symbiote, but it will have you dressed as a real ringer for the classic character. Which means you can indulge in whatever kind of super-villain antics you'd like!

Marvel Comics officially licensed, this costume comes with a jumpsuit and mask. The suit features padded muscle effect in the chest and arms, and of course, has the Venom spider emblem printed on the front. It also comes with a molded mask that’s shaped in the form of the Marvel villain’s face. Super-detailed, it has his big nasty fangs, extra-long tongue, and even some fake slobber. It has see-through fabric patches built into each eye for vision, and fits with elastic bands that feature hook and loop tape fasteners for optimal fit.

Fun.com is for fans!

That's right, the staff here at FUN.com are fans just like you, which means we know exactly which items are top sought by collectors. So, after you're done with your costume fun, be sure to shop around and check out our awesome assortment of gifts, too. When it comes to Marvel fans, we've got you covered with lots of great items for villains like Venom. And, of course, lots of merchandise for all the heroes of the comic book world, too!