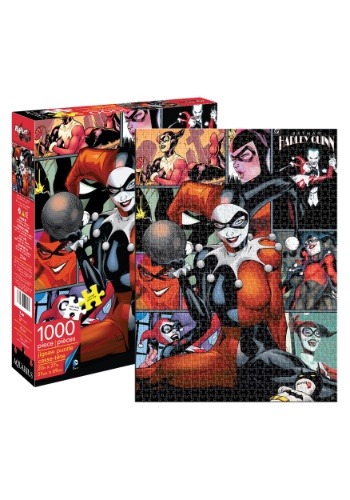 Put Together the Pieces of Harley Quinn

Harley Quinn. She's known to be the one side of a twisted love affair. The other side owned by the Joker, Batman's biggest and dangerous nemesis. What does she see in him anyway? It's a complicated question that might generate a more complicated answer. Since she entered the world of DC comics, comic book fans have tried to put together the pieces that explain what demons and devils reside inside of her. So, here is your chance to make sense out of a whole bunch of Harley Quinn pieces, figuring out the larger puzzle, which is, after all, her.

Accept the task of taking 1000 jigsaw puzzle pieces, which when put together, present in the finished puzzle a collection of illustrations from Harley Quinn's nefarious and mayhem-making career. The overall artwork is fully-detailed, with Harley in the center, holding a lit bomb! The completed puzzle sizes up to 20"x27", officially licensed by DC.

One Dimension Revealing Many Sides

If you're a Batman fan and know all of Gotham City's villains and villainesses, you will delight in spending the time and brainpower needed to figure out the pieces of Harley Quinn.