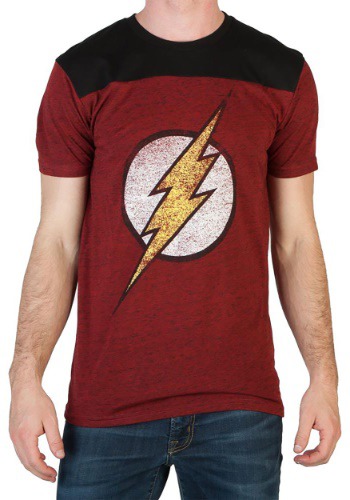 Have people always called you quick? They're not only talking about your running skills. You've always had an ability to pick up things pretty easily. Be it the tricky art of baking croissants, serious computer skills, or putting together the tendrils of a murder mystery. The Flash is quick too, of course, but novices don't realize that his main ability isn't just a physical attribute. We're working on building up this superheroes reputation as a quick wit. Just think about it, no one else connected Superman's rocky resurrection to Pet Cemetary.

Now, you may or may not share the Barry Allen's prankish side and continuous craving for snacks, either way, representing this young hero is worthwhile! He's one of the most polite heroes, apologizing for his colleague's behavior after they pull their usual stunt of disappearing when commissioner Gordan turns his back (that is pretty rude)! This t-shirt allows you to show your Flash pride with a touch of retro flair. The base is a feathered red cotton polyester blend and proudly displays a textured Flash Logo on the front.

Now, Can it withstand the high friction caused by the Flash's antics? We don't know, maybe you'll have to test that out yourself!