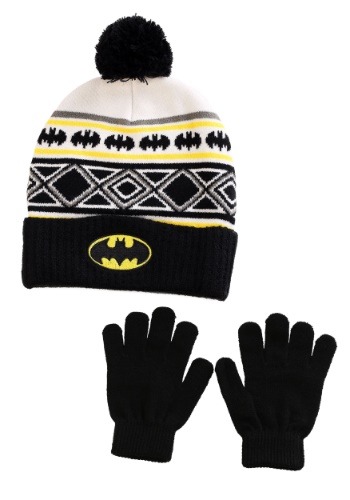 Imagine: Wind a snow globe's music box, whose music is "Silver Bells," and play the music. Shake this globe mightily, and then watch the snowflakes inside swirl and fall downward. As the snowflakes settle onto the bottom, a figure dressed black and wearing gloves, a bat-like cowl, and a scallop-hem cape is revealed.

It is Batman whose running legs and pumping arms appear frozen in time. It's a snowy scene, and you wonder if he is carved to look like he is chasing a villain like the Joker or the Catwoman. Your boy takes the globe, shakes it for himself, and delights in seeing the impressive Batman figure inside. Then his imagination takes over.

It's hard not to like Batman. He is just human after all, who possesses only human powers. He questions himself and is vulnerable to physical injury. This superhero humanness has been creating fans for more than 80 years. And your boy is probably one of them who enjoys Batman-related things, like this ski hat with gloves.

When wintery snowflakes fall in your part of the globe, keep him ready to go as if he is the Batman.