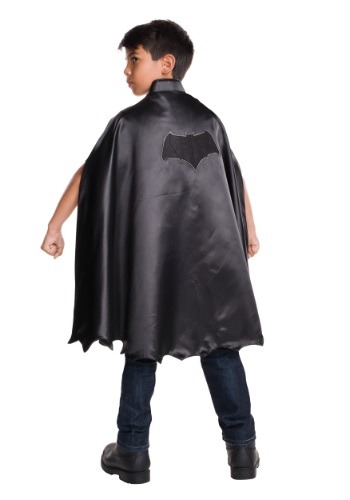 When people think of the Batman, they usually go right to the gadgets he wears or the cowl that he’s become so well known for.  And, honestly, who can blame them?  Those flinging Batarangs and the newly adapted Grapple Gun are pretty much nonstop awesome.  The dark mask has kept Gotham baddies fearing the night for years, as well.  But, people are overlooking an important part, here.  He’s called the Caped Crusader for a reason.

Well, we’re here to ensure that the cape is given the glory that it deserves and you can help the process by turning your tyke into the Caped Kiddo with this officially licensed DC Dawn of Justice Deluxe Batman Cape.  The satin fabric cape fastens with the innovations of Hook and Loop fastener and has the sleek black shade and the iconic Bat symbol on the back under the shoulders and the jagged hemline will have them feeling ready to soar.  (Just remind them that actual flying is Superman’s thing!)