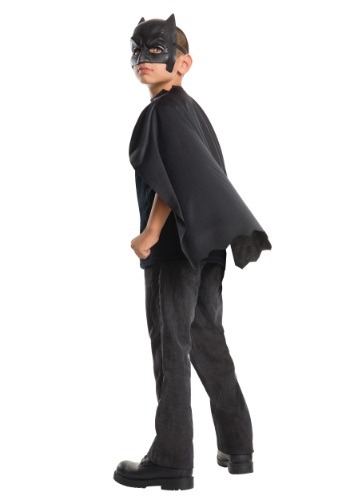 Everyone needs a hero to look up to.  And, sometimes, we need to become the hero as well.  If your kiddo is a youngster in Gotham and has seen first hand the dangers that walk along those streets, they’ve also probably seen the flare of light that makes up the Bat Signal.  They’ve perhaps encountered the cowled Caped Crusader rushing out to help those in need.  They might have even seen the guy willing to team up with the Man of Steel, the Fastest Man on Earth, the Dweller in the Depths, and the Amazonian Princess – all of them with their powerful and near magical abilities – and all to fight off threats far, far bigger than a guy with some handy gadgets and ninja skills!

Well, they might find Batman to be a true hero, but you can become one for your tyke, yourself, when you give them this child DC Dawn of Justice Batman Cape and Mask Set.  The cape fastens with space aged technology, the mysterious Hook and Loop fastener, while the molded plastic mask gives an officially licensed Dark Knight look without obscuring your kiddo’s wide grin.  Team up with the rest of the League and be heroes to us all!