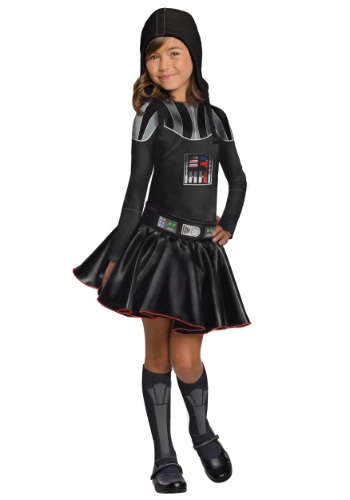 Well, she's done it. She's decided that the dark side of the force is much, much more fun than the light side. Sigh, whaddya gonna do, they grow up so quick! There's really no reason to lament her turn towards the dark side, though, and in particular, there's no reason to get her a big stuffy bio suit to have her fitting in with the other Sith lords. Nope, we can get her something much more breezy and fun, that will still have her romping around as a full-fledged bad guy.

Start her out with this Girl's Darth Vader Dress Costume, and she'll have a style that's patterned after one of the all-time greats, Mr. Darth Vader himself! Like we said, this costume is way more chill than his iconic suit and helmet (even though it's directly inspired by it) because it's designed as a dress ensemble. It features printed details that echo Darth Vader's classic styling, and it has a hood hat and printed socks to complete the style. That's much more fun to wear than serious heavy-duty armor! Get her this Star Wars costume, and she'll be a Sith fashion trendsetter in the galaxy far, far away!