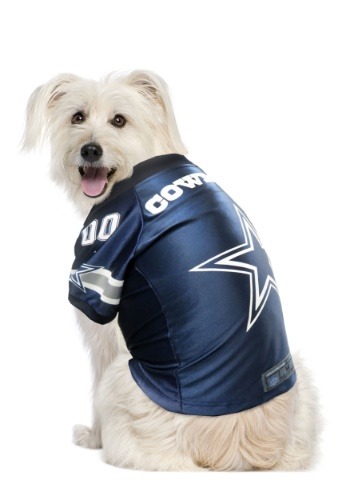 He's got four legs, but that's never stopped him before. It's time for him to really step up his game and achieve his goals. It's time for him to become a star NFL player! Of course, he wants to join the team that you both love and adore, the Dallas Cowboys. The 'Boys have a long and storied football history, and he'll be ready to get his paws on the field with this premium pet jersey!

This Dallas Cowboys pet jersey is NFL officially licensed, and looks just like the apparel the team wears on the field. With player number "00" and the franchise logo on the back, he'll be ready for all the NFL action he can handle. (Even if that's just hanging out and watching the game!) We have sizes extra small to extra large to fit almost every breed, so no matter what kind of four legged friend you have, suit them up in real Big D style with this jersey!