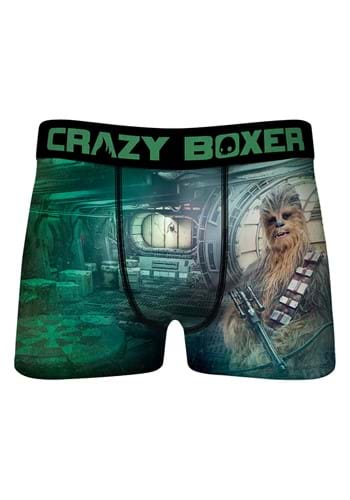 If there was a contest for Most Awesome Star Wars Character, Chewbacca would be our number-one pick. The Wookie from Kashyyyk is a tough, devil-may-care fighter who manages to look dashing despite fur that resembles a 70’s-style shag carpeting. He can roar like an unholy combination of bears, badgers, lions, seals, and walruses (look it up). He can rip the arms right off of a Storm Trooper. Best of all, he never has to wear underwear. How cool is that?

Most Star Wars fans can’t wear a costume to work, so these officially licensed Crazy Boxer Men’s Chewbacca Boxer Briefs are the next best thing! You’ll be growling with delight over the fantastic graphics of Chewbacca superimposed in front of the Millennium Falcon’s interior, the soft, elastic waistband, and the comfortable material. They are perfect for any occasion, from smuggling spice to saving the rebellion. As Chewie would say, RAWRGWAWGGR!