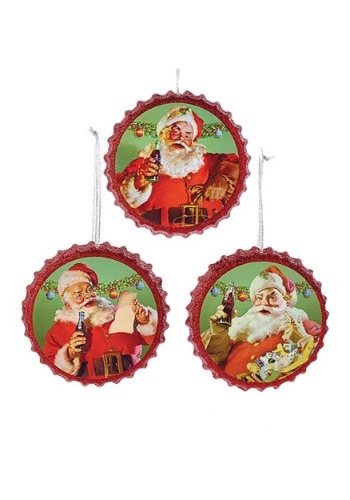 We’ve seen the Santa’s list. Not the Naughty and Nice List, mind you. That he keeps under strict lock and key. We’re talking about Santa’s list of favorite things. The first thing on his list is delivering presents. That guy just loves to reward good boys and girls with their favorite toys. Second up on his list, is cookies. This one is really no surprise. The guy loves to snack on cookies of all kinds and it’s sort of like his Kryptonite. The third place spot on the list is the real shocker! It’s not milk… it’s Coca-Cola!

It’s true. Santa loves an ice cold Coke more than milk, which is why he shows up on these Coca-Cola Bottle Cap ornaments.

This 3 pack Christmas ornament features the holly jolly man himself! Each one is designed to look like a Coca-Cola bottle cap and comes with a unique image of Santa Claus enjoying a Coke on the front. One shows him checking his list, another shows him relaxing in front of some Christmas décor and the final one shows him holding a sack of his famous toy!

Perfect for Your Tree

If you love Coca-Cola as much as Santa, or you just love St. Nick himself, then these ornaments are going to look great on your tree!