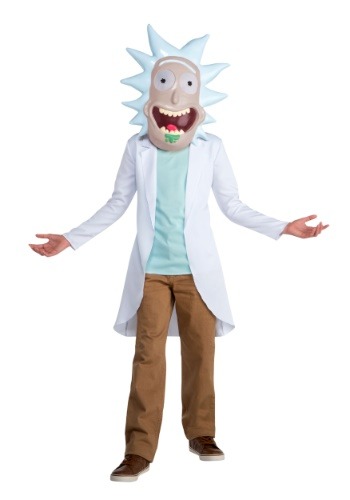 You can never predict the actions of Rick Sanchez. If watching episodes of Rick and Morty has taught us anything, it’s that! One second he’s constructing Anatomy Park and the next he’s trying to get his hands on some Szechuan Sauce. Then he’s crafting love potions and being put on trial by the Council of Ricks! He always manages to use his wits and his array of nifty gadgets to wriggle his way out of trouble though.

Is your child resourceful and clever? Do they want to head to other dimensions? Then perhaps you have a young Rick Sanchez in your midst. He’ll no doubt be inventing some cool gadgets in no time, but maybe your child needs this officially licensed Rick and Morty costume!

This child Rick Sanchez costume turns your young adventurer into the main character from the Cartoon Network series. The costume comes with a white lab coat that has a turquoise shirt front attached to it. It also comes with a Rick mask, which is shaped to look like his face. It even has wacky hair and a unibrow molded into it. Of course, Rick just wouldn’t be Rick without a little green spit coming out of his mouth, which is molded onto the bottom lip of this mask.

Once your child is all dressed up in this Rick and Morty costume, they’ll be ready for the next big adventure. Whether that just means a trip to the store to pick up some Szechuan Sauce or you’re heading to another dimension to fight some aliens is completely up to you! You can even join your child by checking out our selection of Morty costumes. Just slip into one of our adult costumes and you can head cause a little mayhem with your young scientist.