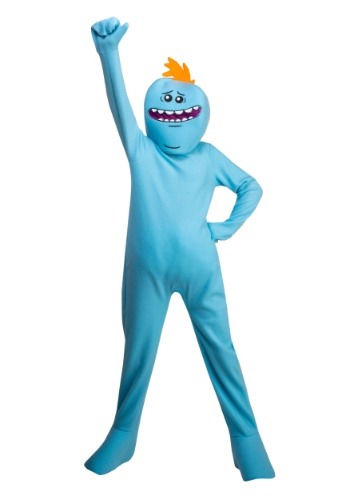 Yes, we know. This teen Rick and Morty Mr. Meeseeks costume doesn't turn your child into a real version of the blue cartoon character. It does, however, make your teen LOOK like the peppy blue guy.

Straight from the Mr. Meeseeks and Destroy episode of Rick and Morty, this officially licensed costume faithfully recreates the look of the character from the show. It’s perfect for any fan of the show and comes with a light blue jumpsuit that fits various body types. Each sleeve ends in a mitten, while each leg ends in a convenient foot cover that fits over most pairs of shoes. Then, there’s the mask! The mask has tons of details from the show. It has a pair of big, black, beady eyes. It also has a wide, smiling mouth that has mesh inside for vision. It also features a bright orange tuft of fake hair on top to finish off the look.

Don’t Ask Him to Help With Golfing