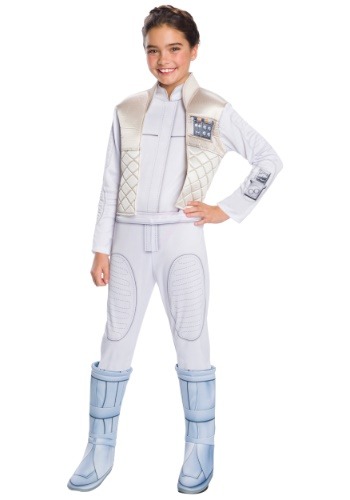 Leia has what it takes to lead the Rebel Alliance. In the original Star Wars, she successfully delivered the Death Star plans to her allies and escaped imprisonment from the clutches of Darth Vader. In The Empire Strikes Back, she evacuated her troops to safety while Hoth was under siege and she was able to rescue Luke after his duel in Bespin. During Return of the Jedi, she snuck into Jabba the Hutt’s palace and defeated the gangster alien to save Han Solo. She even managed to disable the shield generator on the Forest Moon of Endor. She seems like the perfect role model for any young girl who loves Star Wars.

Is your girl a real leader? Would she blast any Stormtrooper who gets in her way? Does she have enough moxie to tell a scoundrel like Han Solo off? Then perhaps you could train her to be the new general of the Rebel Alliance! All she’s going to need is the proper attitude and the right kind of outfit. Costumes are sort of our thing, so we can help you out with the outfit part!

This child Leia costume recreates the look of Leia Organa’s outfit from Star Wars: The Empire Strikes Back. It comes with a white jumpsuit that has printed details on the front, along the pants, and on the sleeves. The cream-colored vest looks like the one seen in the Hoth siege scenes at the beginning of the movie. The boot covers fit over your child’s shoes, so they can wear their favorite pair with this costume.

Blasting Her Way to Victory

To finish the costume off, you can add one of our Star Wars toy blasters to the look! Even Emperor Palpatine himself won’t be able to stop your little girl when she’s running through the neighborhood outfitted with a blaster and this licensed Star Wars costume!