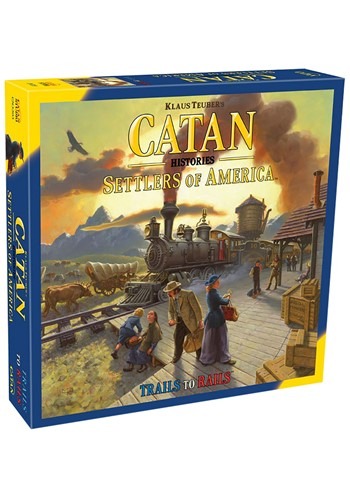 The mysterious island of Catan has taught us all the importance of resource management, the thrill of building roads and establishing cities, and the glory of crushing your opponents by denying a critical trade! For years, we've strived to claim the longest road, the biggest army, and those sweet, sweet development cards and the victory points that come with it!

But can the fun of Catan grow even further? Are there regions to explore? Longer roads to build? More cities to claim!?

If you've already mastered the fun of Settlers of Catan, it's time to try out the second game in its Catan Histories series! Become pioneers of America as you travel ever west-ward. In this game, 2-4 players will join in a 2-hour game. The system is largely the same in that you'll roll two dice to determine what hexes produce resources... or if it will have the bandit snatching away the growth. Use and trade your resources to develop railways, militia, and acquire development cards. Your goal is to trade your 'goods' to the cities owned by your opponents. The first to expand west, build their cities, and (most importantly) supply their goods throughout America is the winner. Several new rules are available, including diminishing returns on settlements in the east as the western territories become more fruitful! Apply new tactics and claim victory time and time again.

Pioneer One Hex at a Time

If the circle of terrain of the island of Catan proves too easy for you, it's time to try your settling skill in America! Expand west and try brand new gameplay rules to prove that you're the true Settler no matter where you explore!