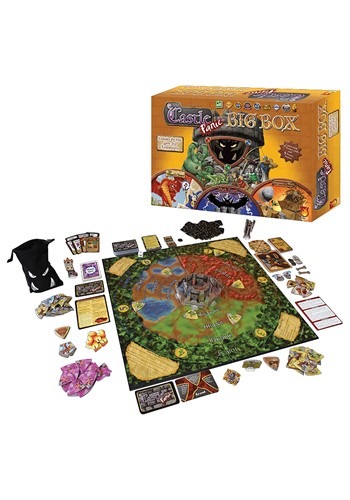 Isn't it crazy how every time a group of mighty medieval heroes band together to create a nifty castle in the middle of the enchanted forest that, eventually, a massive horde of horrible monsters will show up and try to break the thing apart!? It's rather rude, we think. That's why we're trying to gather up a proper team of tower defenders to knock those monsters in to next week. Unfortunately, some of those monsters look really scary... so we're starting to panic!

It's time to gather up 1-6 noble players for an hour of excitement in Castle Panic! In this game, you'll reproduce the classic tower defense games with a bit more strategy and a heck lot more socialization. When setting up the game, you'll create six towers and six walls that serve as your home. Around you are four tiers of the enchanted forest. Monsters will appear at the edge and, at the end of each player's turn, creep closer to the castle until they start tearing down walls and breaking up your tower. On a player's turn, they can discard or trade cards and then play color-coded hero cards, fortification, and other event cards to damage and ultimately bring down the baddies. If monsters get too close, they can get into the castle and begin to tear towers apart! If they all fall, the game is over for everyone. But, if you manage to keep that forest tended and beat the bosses with at least one tower standing, it's victory time! And, to make it extra exciting, we're upgrading to the Big Box so you'll have the Wizard Tower, Dark Titan, and Engines of War expansions featuring a bunch of new cards and optional rules.

Cooperative games help to build lasting friendships and strengthen the ones that are already there—just like making a strong castle and firm walls. But, that doesn't mean that you can't play with the optional Master Slayer rules in Castle Panic to find out which of the winners is the most winnery!