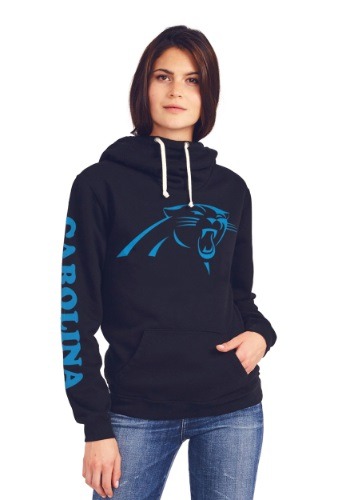 Even team mascot Sir Purr will approve of this officially licensed Carolina Panthers Women’s Cowl Neck Hooded Sweatshirt, featuring the Panther’s logo on the front and Carolina along the right sleeve. You can keep pounding your wine and cheese or food and beverage of choice while you tailgate, then take in the games in person at Bank of America Stadium or on TV. Relax in your officially comfy sweatshirt while you cheer on quarterback Cam Newton and the rest of the team against rival Atlanta Falcons and Tampa Bay Buccaneers.

Despite being an expansion team and a relative late-comer to the NFL, your team has accomplished a lot in two-plus decades of play. You’ve reached the playoffs seven times, had four NCF championship games and reached the Super Bowl twice. You lost both times but, hey, some teams never make it to the big game. We’ll give you a capital E for effort, and we know you won’t give up until you win the trophy. You can take solace in the fact that Super Bowl XXXVII is considered one of the best Super Bowls of all time.