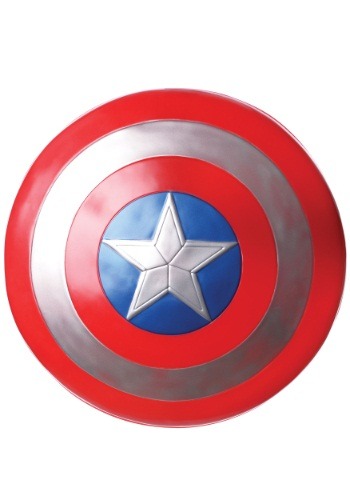 Captain America’s shield is an iconic symbol of truth, justice, and the American Way. Black Widow, the Punisher, and Deadpool might tote guns and look mighty cool doing it, but good ol’ Cap isn’t about putting bullets in people. (Unless they shoot the shield and their bullets ricochet back at them, that is. But that’s their own darn fault. Even Captain America can’t protect people from their own stupidity.)

No, a shield is about protection. It really can only be used in self-defense, besides when Cap inevitably chucks it some baddy’s head like a giant frisbee. Because Captain America holds himself to higher standards than those run-’n’-gun vigilante types. (Except when he’s brainwashed by Hyrda. Is it brainwashing if Red Skull uses the Cosmic Cube to remake reality so Cap was always evil in the first place? Perhaps the less said about this turn in the saga of Steve Rogers the better.)

Unfortunately, we couldn’t source any vibranium steel alloy for this officially licensed Captain America replica shield, so don’t go to trying to reflect any blows from Thor’s hammer or the Hulk. (Your friend’s Hulk Hands should be fine.)