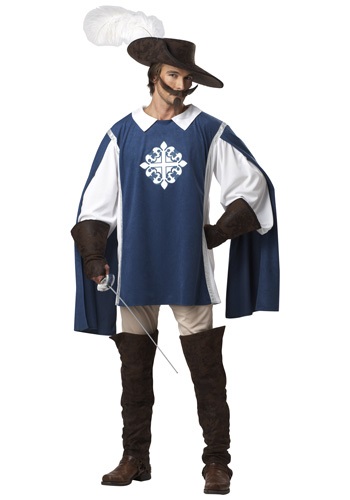 In some literary circles, some believe there were really four musketeers! The Alexandre Dumas novel tells the story of a young man, D’artagnan, determined to join the Musketeers of the Guard. He meets three musketeers and is determined to join them, which he eventually does—making four. Three plus one makes four, right? Right. If that’s the case, then that editor might want to keep the title off his resume.

Oh well. We don’t care about as much about the number as we're letting on—we just love Musketeers! So, whether you gather a group of two pals or three, or four or seven, you should show off your strength and skill to your fellow (however many) musketeers in this outfit! When you wear this Valorous Musketeer Costume, you’re honing an epic tale of adventure, friendship, politics, and yes, sword duels into one clean package. Because really, who doesn’t love sword duels? Boring people, that’s who.

Do you want to be number five? Or are you down to role-play? Athos, Porthos, and Aramis (and D’artagnan, if you consider him a “musketeer”) will be happy to have you join their ranks, seeing how you look fierce and festive in this outfit. The look includes a tunic and shirt combo, gauntlets, a fabulous feathered hat, and boot spats. Wear it with your own black pants, or buy a pair of period-specific breeches. Add a fake mustache and beard and a must-have musketeer sword to finish off the look.

Get Your Popcorn Ready

While we’re busy questioning, contradicting, and rewriting history, "The Five Musketeers” sounds like a sequel we’d preorder. And we bet there would be a movie adaptation in its future. You would do well to check that out, and maybe wear this to the casting call.