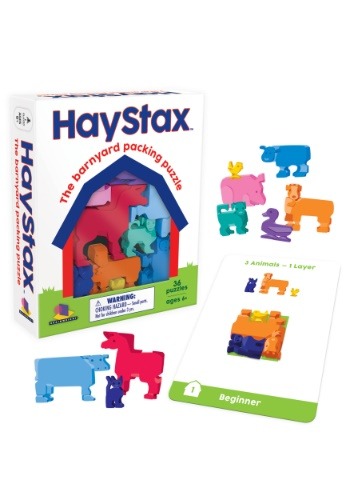 Real farm animals don't cooperate. Believe us. We've tried it. We went down to the local farm to ask the farmer if we could stack up a bunch of animals into a pyramid. The farmer thought we were strange, the animals didn't cooperate, and we're pretty sure the chicken hates us now. Don't make the same mistake that we made. Instead of trying to create an animal pyramid at your local farm, just pick up this Hay Stax game by Brainwright!

This game is rather simple, yet oddly satisfying! The game comes with 26 challenge cards, each with a different animal formation for you to build. It also comes with 9 farm animal figures, including a cow, a horse, a pig, a dog, a duck, a chicken, a cat, a goat, and a sheep. The game is designed for one player and for ages 6 and older.

Just about anyone can play! Just grab one of the challenge cards! Then you must try to stack the animals exactly the way they're pictured on the card. Be careful though, since some of the formations can be a bit tricky! It's a great way for kids to practice spatial recognition and you can even set a timer to add some extra challenge to the game.