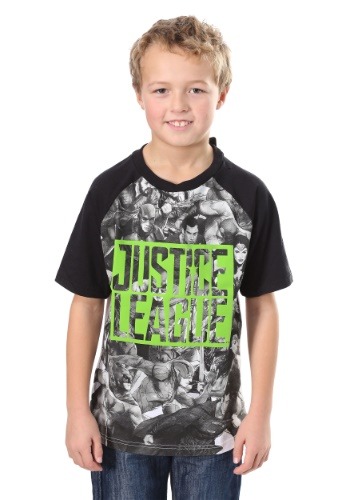 It's time for truth. Beating up the bad guys. Saving the planet Earth. And time for some justice, too! Yeah, it's time for all that and more when you check out Justice League in the theater, and while we can't get enough of the action-packed film, we know there's a whole new generation of fans who want to do what they can to help this super-team defeat all the villains.

He can use the power of his favorite Justice League characters when he goes in this cool Justice League Raglan Shirt. Artwork featuring, and inspired by the cool characters of the team, like Aquaman, Cyborg, The Flash, Batman, Wonder Woman, and Superman, too, he'll have all the right players in place to make sure his own mission is a success. The shirt also features a green Justice Logo to tie the epic ensemble print theme together. 100 percent cotton, this shirt is officially licensed, and ready to help him show off his heroic style at school!