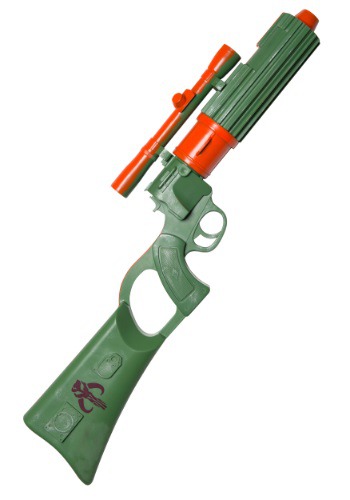 Why is Boba Fett so cool? For a guy who didn't get that much screen time in either Empire Strikes Back or Return of the Jedi, he sure does have a lot of star power, and a dedicated fan base. We think we know the answer: the guy is just plain cool, from head to toe. His singular style has inspired generations of fans, from his unique ship to his choice of armor. Every last detail about this guy is awesome, and that includes the weapon he carries. Unlike the seemingly mass-produced blasters that both stormtroopers and rebel soldiers fight with, Fett's is (naturally) distinct and in a class all its own. So if you're dressing up as the galaxy's most feared bounty hunter, don't forget this Boba Fett Blaster Weapon!

At two feet long and with Fett's iconic color scheme and armor markings (including the dreaded Mandalorian skull), this plastic blaster makes a fearsome addition to your Boba Fett costume. It's a detail you won't want to miss, whether you're dressing up for Halloween, doing cosplay, or hunting no-good smugglers across the galaxy!

Questions & Answers
Q: I'm frm México, and I'm interested in buying this item, but its not appearing on the Mexican web site.

If i buy it from here its going to be shipped?
Asked by Kristopher | August 4, 2021
Answer
Ask a Question
Reviews