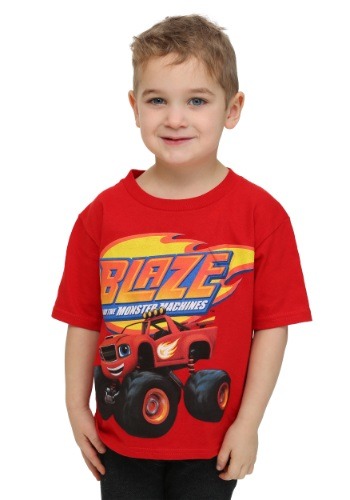 Who has blue eyes, four wheels, lightning flames, and happens to be a monster truck? We bet if you ask your child, he would be able to say, without a doubt, that we are talking about Blaze the Monster Truck!

Blaze and the Monster Machines is one of the hottest shows on Nick Jr, and we bet we know why. It probably has something to do with the engaging characters, scientific knowledge, and of course, the monster machines! These monster machines are honestly so cool. Blaze can turn into almost any vehicle or machine and is a racer to boot.

If your little dude been talking about revving engines and racing Monster Machines, you know that he has been watching the hit show on Nick Jr nonstop! There is nothing better for your little fan than this Blaze monster truck t-shirt for boys! It's got the title character right on the front along with the show's logo. This shirt is officially licensed and is 100 percent cotton, so you know that this shirt is the real deal made from real materials. Vroom vroom, let’s blaze!

$2.99-$6.99
Item # FZBMSB003 | Write A Review
Sign Up To Be Notified When Your Size Is Available
Items Included
Product Highlights
Size Chart
2T3T4T5T45/67
Inches Centimeters
Product Description
Questions & Answers
There are no questions for this item yet. Be the first to ask a question!
Ask a Question
Reviews Write A Review