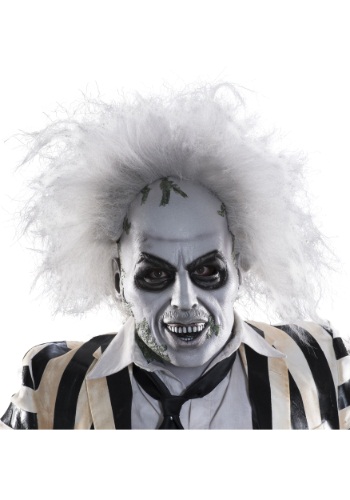 We sometimes look down on Beetlejuice but honestly, he's a pretty accomplished fellow.  At least he says he is. According to Mr. Juice, he attended Julliard and Harvard. He might have been sarcastic. He's traveled through the black plague which makes him at least six-hundred-seventy-years old. We're wondering if he's had his distinctive look throughout this whole time. His pinstriped suit might have looked a little strange in the 1300's but he's the ghost with the most so he gets to make the rules. . . or most of them at least.

So, whether you're headed off to the Inferno Room or you're heading off to party with the living if you want to go as Beetlejuice, make the most of it with this mask. The grody facial expression has attached gray hair to get that legitimate ghoul look. You'll stay comfortable with holes in the mouth, eyes, nose, and ears. You might not have all of Beetlejuice's accomplishments but you'll love having his distinctive look.