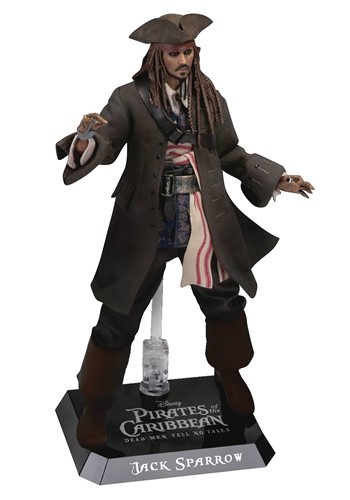 ... that you will remember as the day you finally caught Captain Jack Sparrow! During his long journey in the Pirates of the Caribbean series, many have tried to capture him. Of course, he's a pirate by trade, so he's not about to let himself get caught for very long. The Navy, other pirate captains, and even Davy Jones himself have tried locking him up, but they all turned up empty-handed. Are you ready to try your hand at catching the infamous pirate? Well, with this Captain Jack Sparrow figure, you have the exclusive opportunity of catching the one and only star of the Pirates of the Caribbean movies for your collection!

This Beast Kingdom 8-ction Heroes figure is an officially licensed collectible from Pirates of the Caribbean. The figure is sculpted from PVC material is design as a 1/9 scale recreation of Jack Sparrow. The figure has intricate details to capture Johnny Depp's features from the films. His clothing is made out of fabric, giving it a highly realistic look and feel. The figure has 28 points of articulation, which gives you countless ways to customize your Jack Sparrow figure. If you're looking to finally capture Jack to add to your collection, then this figure is THE figure you want.