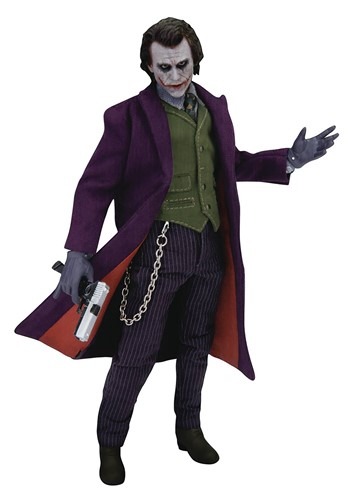 Let's Put a Smile on that Face

At the time, in 2008, it was controversial. Now, we all know how wrong the naysayers were! Heath Ledger's performance as The Joker in The Dark Knight will go down as one of the greatest renditions of the character of all time. Despite a lot of skepticism and preemptive comparisons to Jack Nicholson's performance, Heath delivered a sinister and realistic take on the character. Now, Beast Kingdom brings you an action figure that's just as epic as the performance with this Joker Dynamic 8-Action Heroes Action Figure.

This amazing action figure is officially licensed from Christopher Nolan's second film in his Batman trilogy, The Dark Knight. The figure is constructed out of molded plastic and features realistic details, along with an immaculate paint job. His clothes are actual fabric clothing. The figure is 1/9 scale and comes with 28 points of articulation, allowing for a wide variety of posing options. He also comes with interchangeable hands, 2 pistols accessories, a bazooka, and various other weapons that fit into his hands. To top it all off, this figure comes with a collector's box, making it an instant classic in your collection.