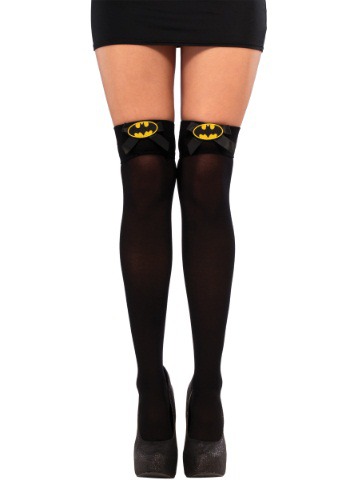 The real issue with being a superhero is maintaining the secret identity while still managing to feel like you are still a hero!  Now, you could go the Superman route and wear your costume underneath your daytime reporter clothes.  But, frankly, it seems like you’d require an entirely additional superpower to avoid sweating and feeling ridiculously uncomfortable going that route.  Some classic tales suggest that spinning in circles can help you transform into your heroic attire, though we haven’t seen such tactics since the golden ages of heroes, so we’re guessing those tricks are done with.

Then, it clicked!  Everyone needs comfortable foot and legwear and we could combine both comfy, sassy wear right alongside garb that would both secretly speak to your heroic identity and be able to show off your symbols when you’re ready to take to the justice-doling itself!  Do so with these officially licensed Batgirl Thigh High Stockings.  These black polyester stockings are going to be functional, comfortable, and also feature the iconic bat symbol over a yellow field.  What could be batter!?