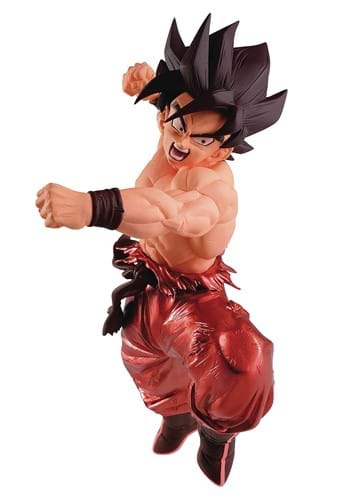 When the going gets tough, the tough use the Kaio-ken! The signature technique has been a valuable tool in Goku's arsenal ever since he trained with King Kai to face off against Vegeta. His body glows red as he increases his power many times his normal level! Now, you can bring the powerful technique to your collection with this high-quality Dragon Ball Z collectible from Branpresto.

This Dragon Ball Z Blood of Saiyans Special X Goku Action Figure showcases the iconic Akira Toriyama character in the midst of a Kaio-ken attack. The statue is made out of molded PVC material and showcases Goku's sculpted muscles. It has a stunning level of detail and has subtle texturing on his muscles, pants, and hair. The figure has a metallic paint job on his pants to help capture the blazing red colors that emanate off of Goku when using the Kaio-ken technique. His body is locked in a dynamic pose, as if he's ready to administer the final blow in an epic battle against Vegeta! Put it all together and this figure will quickly become the centerpiece of your DBZ collection.