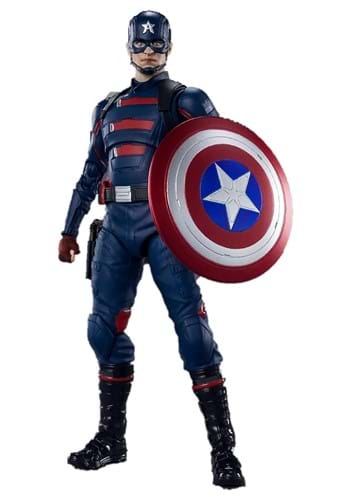 Some people are born to be heroes. Steve Rogers followed his sense of morality, even when it pit him against authority. That's why he's one of the greatest heroes of all time. Others? Well, they lose their way. Good intentions can lead a man down a darker path... and that's exactly the path that John Walker took. He wielded the Captain America uniform, but could never hold himself to the same moral compass that Steve did. This Bandai Spirits Captain America Figure brings you a man who followed the wrong path!

Inspired by the Disney series Falcon and the Winter Soldier, this figure is a highly detailed recreation of John Walker during his run as Captain America. The figure has various points of articulation and comes with interchangeable hands and heads, so you can customize how your figure looks. He also comes with a holster, the classic stars and stripes shield, and extra effect parts. He's ready to join your collection... even if his moral compass needs a little work!