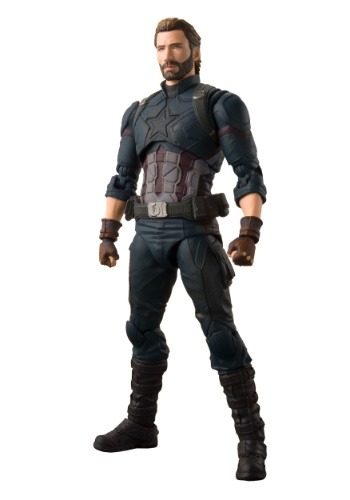 Captain America means business this time. You can tell that he's not messing around by that handsome beard he's sporting! Just look at it. We think that beard could take on Thanos all by itself, Infinity Gauntlet be darned. In fact, we sort of think that the beard should be named the new honorary leader of the Avengers... but that's probably why we don't get any say in how the Marvel Cinematic Universe is run.

The good news is that Bandai seems to like the beard as much as we do and they've crafted this high-quality action figure based on the Avengers: Infinity War's iteration of Captain America.

This Avengers: Infinity War Captain America S.H. Action Figure comes with a stunning amount of detail packed into it! His signature armor has molded details, including a textured star in front and armor pieces on the waist. Cap even has his sleeves rolled up, because he's ready to get his hands dirty to save Earth! He comes with 14 points of articulation and even features interchangeable hands. He also comes with Corvus Glaive's spear and some explosion effects to help you create the perfect pose for him! Any fan needs this detail figure front and center in their collection!