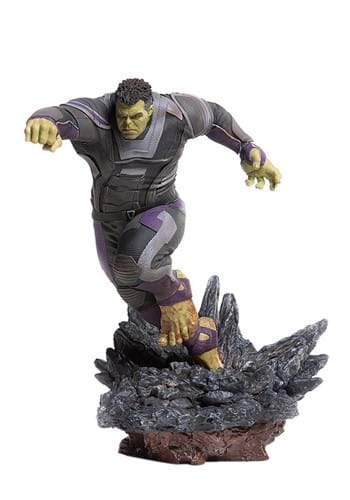 Our favorite green guy, the Hulk, has come a long way. In the first Avengers movie, Bruce had mastered the art of using his anger to bring out the big green guy. Later, he started to harness his power to fight villains on the regular. After that, he found himself on a battle-world, completely engulfed in his Hulk persona. And finally, his anger seemed a bit resolved by the time Endgame came around. Heck, he even shared his tacos with Ant-Man. Does that sound like the action of an angry monster?

Well, this new and improved version of The Incredible Hulk is now ready to join your collection and he's definitely not angry about it!

This Avengers: Endgame Hulk BDS Art Statue is a 1/10 scale figure that's officially licensed from Marvel. The figure has a polystone construction and features plenty of realistic details. It's even hand-painted to perfection, with color schemes that match the movie, including his mission suit during the big battle against Thanos. It's also a limited edition figure, which makes it a great collectible to add to any Avengers collection. And you don't even have to worry about making this collectible angry!