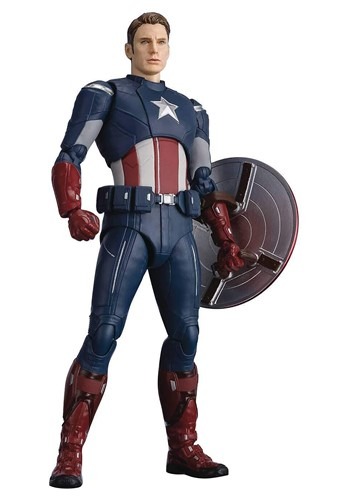 The toughest thing that a human can do is face themselves. You know, really dig deep inside yourself and grapple with some of those inner issues that have been haunting your psyche. Well, for Captain America... it's quite literal. In Avengers: Endgame, Cap has to go toe to toe with a younger, slightly more naive version of himself. They literally engage in a bit of a grappling match over an Infinity Stone! It's one of the greatest scenes in the movie and this SH Figuarts action figure captures Cap's look, right before the big duel.

This officially licensed Avengers: Endgame Captain America Cap Vs Cap Action Figure is a highly realistic figure that stands 6 inches tall. He has 14 points of articulation, allowing you to pose Cap into a near-limitless number of poses. He also comes with a variety of alternate body parts to help you customize your figure, including Cap's shield and Loki's staff. He even comes with alternate heads so you can have masked Cap, or unmasked Cap! This figure is a single figure, so in order to recreate some of the epic battle scenes from the movie, you will need 2 figures.