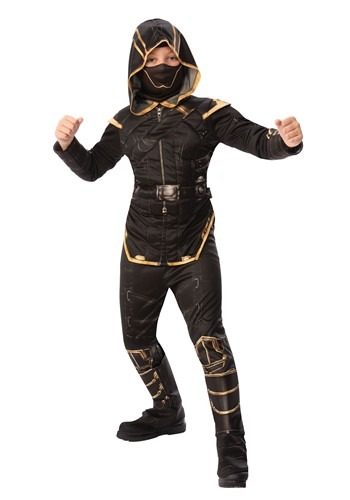 Did you know that Hawkeye has been around Marvel since 1964? Like many superheroes, we are introduced to Hawkeye as a villain. Hawkeye eventually cleaned up his act and earned his way onto the Avengers. Clint Barton has always been brash, but that's why we love him. Who else (without powers) could stand toe to toe with Iron Man or Cap and not back down? He has been around since the mid-'60s, so Barton has been on a ton of different teams: the Avengers, the West Coast Avenger (which he founded), the Thunderbolts, the Secret Avengers, and so on (Barton has done more stuff, but you probably have things to do so we'll spare you). Clint is donning his famous Ronin suit from Avenger's Endgame. The armor originated from his run on New Avengers after he returned to life and was still coming to terms with being alive again (comics, right?). During this time Clint had to get away from everything and decided to put down bad guys the hard way in order to work through some issues.

Relive the iconic moment from Avengers Endgames and pick up your Boys Hawkeye Ronin Avengers Endgame Costume. It comes with Hawkeye's iconic balaclava hood, which will cover your child's entire head and will obscure part of their face when they need to be covert. The costume comes with padding for that faux muscly look all imaginative kids love. If your kid comes face to face with a cult of demon ninjas (a real thing; comics right?), the boot covers have elastic bands that slip nicely underfoot and will stay secure. The best part of this outfit is the attention to detail. It looks so close to the real thing your kid will have every Black Widow cosplayer turning heads. Grab a Ronin costume and fight evil in style.