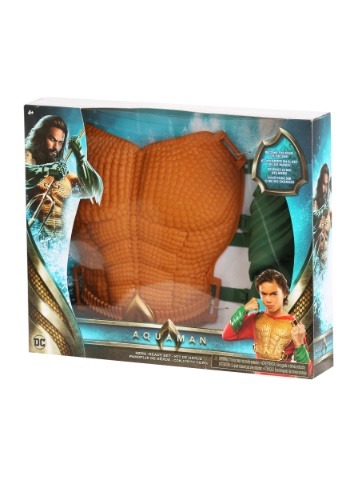 AQUAMAN IN A FLASH

Becoming Aquaman requires lots of hard work and training, both on and off the land. Plenty of hours are spent working out, building muscle and learning how to fight on the ocean floor. Well, if you're a kid who is forced to go to school for the majority of the week, endless training isn't an option for you. (Hey, at least you'll never feel the excruciating pain caused by "Leg Day," well at least not for a while.) But here's some great news— you can still get Aquaman's uber-buff physique! Using the Aquaman chest and gauntlet set, transform into The King of the Seven Seas in an instant. No exercising necessary!

Wield the power of the seas with ease! The DC Comics Aquaman hero-ready chest & gauntlet set features plastic, adjustable accessories, molded and painted to look exactly like Arthur Curry's battle armor. The chest plate has bumps for texture and a golden Aquaman-emblem belt while the gauntlets are reminiscent of green seaweed. Made for children ages 4 and above, this officially licensed set is ideal for creative play and Halloween!

Pick up the deluxe light-up trident prop and the ocean will be yours!