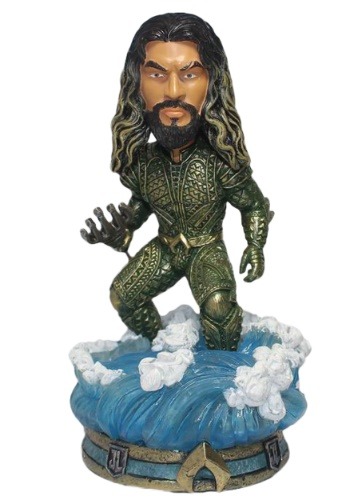 From the time Arthur first flipped his hair in a cloud of steam as he fought off pirates in a submarine, we knew Aquaman would be an epic adventure we wouldn't soon forget. After all, how often do the heroes taking down the bad guys rock a pair of jeans and wear their hair long and curly? Scratch that. How often do they go back to their dads afterward to partake in happy hour while wearing a cable knit sweater and taking selfies with the locals? We'd say almost never. It's not just Aquaman's muscley form that makes this hero America's newest heartthrob, it's his laid back yet caring ways that are making waves! We love his underwater so much we can't help but yell, "full-steam ahead" to the next Aquaman adventure!

In the aquatic suit of armor that he won in the deepest depths of the ocean, this Aquaman bobblehead is cresting the waves and facing whatever fight is waiting for him next. He's ready with the Trident of Neptune so you know he's sure to win the fight!

If you've ever wanted to have a casual friendship with Aquaman, here's your chance! Ask this bobblehead questions and his noggin a nudge and you can watch him nod along. Should you book a scuba diving lesson in Hawaii this January? You know what Aquaman thinks!