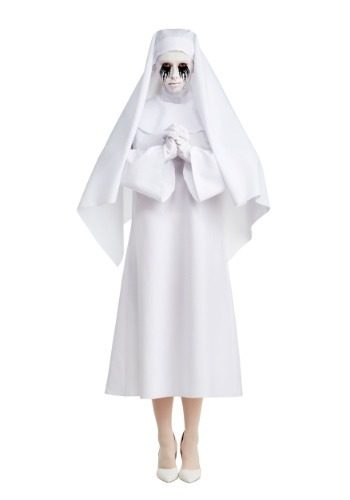 The Creepiest of Them All

If you’re a fan of American Horror Story, you know that everyone has their own opinions of which is the scariest season, which is the weirdest season, and which is the season we could all do without (you know which one we’re talking about). Anyway, if you ask us, the downright creepiest season is Asylum. What with weird medical experiments, demons, serial killers, ugh, everything about it touched on our worst fears. And to celebrate that success (it’s not easy to make us squirm), we made this American Horror Story Deluxe The White Nun Womens Costume for those of you who agree that Season 2 was, in fact, the creepiest!

What better way to make everyone think about the haunted halls of the Briarcliff Institution, or Sister Mary Eunice’s terrifyingly wicked control of the place? Even talking about it is giving us the chills! This look is bound to be a hit wherever you wear it—even if you’re immediately told to get changed because you’re too scary for everyone to handle.

Which is strange, because in and of itself, this is not that scary of a costume. It’s an all-white pull-on dress with a matching headpiece and cowl that give a sisterly appearance. The included white gloves are easily pulled on and off. Maybe in part it’s so scary because of all that is associated with it, namely, all of AHS: Asylum, as discussed earlier...or maybe it's something to do with the scary-as-all-getup included make-up. The kit has both white to cover your face, and black cream to spread, as if like tears, over and down from your eyes. That must be it. Something about those black tears just terrifies us to our core.

So wherever you’re going and whatever you’re doing with this costume, just remember you’re now representing possibly the scariest thing in all of the AHS series. People may disagree that season 2 is the creepiest, but once they see you in this full outfit, they won’t be able to argue much at all with you any more!