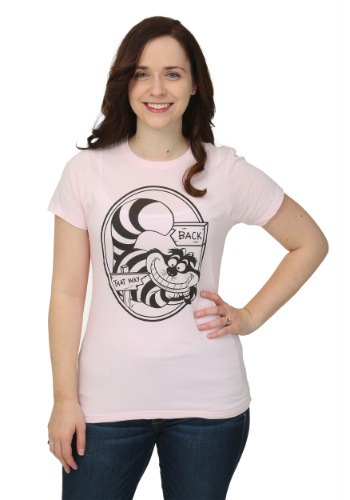 A dynamic lady like you knows that sometimes life can become a bit...confusing. So many paths, so many options. How is a gal supposed to know what to do, where to go, which route to take?

Don’t expect the Cheshire Cat to help out too much in that arena. We think he aims to confuse. But it’s not his fault (we don’t think), it is simply in his nature. So rather than fighting those all-mixed-up feelings, embrace them in this Women’s Alice In Wonderland That Way Cheshire Cat T-Shirt! It's got the enigmatic cat on the front as seen in the classic Disney animated film, and it (subtly) tells the world, “I’m having one of ‘those days,’ OK?” But don’t sweat it, sister. This tee is not only signaling your state of affairs, it’s also so cute that we think you may forget all about your confusing life, if only for a moment or two. And of course, the Cheshire Cat’s mixed up messages are really just telling you one thing: the only wrong choice is the one you don’t make!