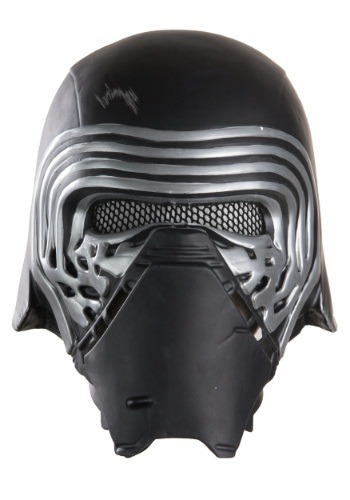 We all have our little frustrating backstories and traumas that we have to overcome in order to move forward and become as awesome as the future ‘us’ that we know destiny anticipates.  But, getting over those initial bumps in the galactic road can be pretty trying.  First, there is the grandfather that practically no one could ever stand head to head with.  Then, there is the father and mother who, let’s face it, basically saved the galaxy from potential annihilation… sort of.  Between running from the law and being a Rebel general, the only one who really had the time of day was a giant furry adoptive uncle!?

Well, with a background like that, who could blame anyone for running off to a virtually undead Sith Lord and dedicating ourselves to becoming the next Darth Vader.  And, when you’re aiming to fulfill a legacy like Kylo Ren is, there is only one accessory that will work to wear.  And, this Star Wars Episode 7 Kylo Ren 1/2 Helmet is the perfect thing to help show off your Vader-ness and still remain uniquely you.  Now, unleash the Force and take your destiny!