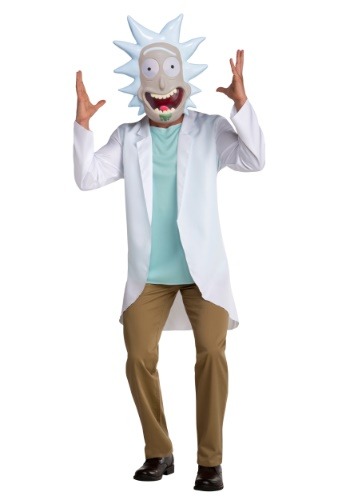 You know that saying, "You can't run from your problems?". This isn't really true when it comes to Rick's realities. He's escaped from some pretty serious pickles. One famous incident was him escaping from reality as a literal pickle! He's escaped getting stuck in an exploding, germ-infested giant body, saving both his grandson and his crush. When Rick destroyed his planet with Praying Mantis bugs, he simply packed his grandson into his "Rick"ety spaceship and heads to a different dimension to replace the deceased versions of themselves. Survivalists got nothing on this morally ambiguous mad scientist!

You'll be ready to enact any science experiments that you can think up when you're wearing the blue shirt and white lab coat that makes up Rick's standard uniform. Only this molded mask could match Rick's wild expressions! The wide eyes are made of a mesh so you can see any wayward aliens that might show up seeking vengeance for your questionable acts throughout the multiverse. With molded hair and a drip of drool at the lip, no one will be surprised when you show up spouting rants about useless nature of a standard science class.

A happy Halloween is as easy as turning yourself into a pickle when you're wearing this Rick costume. Whether you head out along or bring your sidekick, Morty along, prepare yourself for plenty of questions about your many adventures. People are still wondering why a planet where everything grows on a cob is so dangerous. Speaking of "whys" maybe you'll be able to straighten out some of the conspiracy theories for all the die-hard fans out there. Does Rick know he's on a television show? Are you sipping on Megaseed? You decide. After all, you're Rick Sanchez! And if you don't want to answer a particular doozy, just use your portal gun and go to a party in a dimension where no one thought to ask that particular query. The power is all yours!