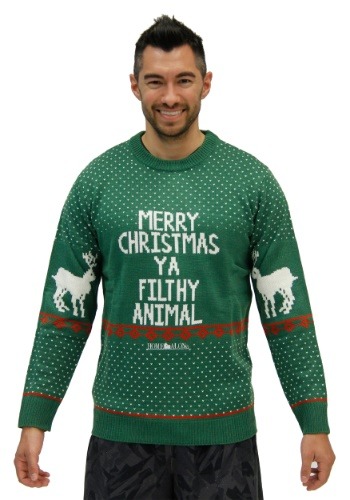 Kevin McAllister, adorable tow-headed Chicago smart-aleck, spawned a love of this catchy phrase––“Ya Filthy Animal”––in the 1990 holiday blockbuster Home Alone. Left home alone at Christmas by his frenzied family, Kevin, played by the less-adorable-as-a-grownup Macaulay Culkin, must create the pretense that he, in fact, is not home alone. When he orders a pizza, he cues up a black-and-white gangster movie and fools the dimwitted pizza delivery teen into thinking the dialogue––and gunshots- are coming from actual persons in the home. Little does he know his customer is an 8-year-old mischief-maker, not a cold-hearted mobster calling his victim Ya Filthy Animal. That’s just one of Kevin’s hilarious antics.

This Fun.com writer knows someone whose favorite movie of all time is Home Alone, and he owns a Ya Filthy Animal shirt. He’s in his late 30s. That may be the demographic for this sweater––guys were prepubescent when Home Alone hit the screens. Some of them have never progressed in their film tastes past this holiday classic. They still chortle at the Ya Filthy Animal scene. We all know someone like that. Get them this Adult Home Alone Green Merry Christmas Ya Filthy Animal Sweater today––our sincere apologizes if this describes you but we hope you enjoy your sweater.