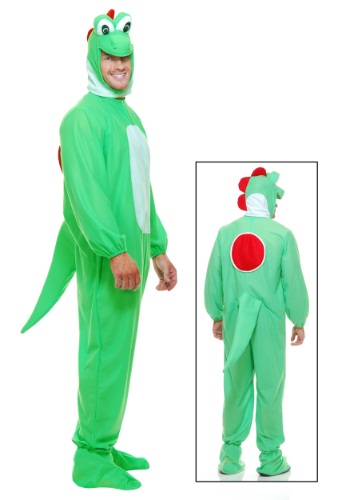 Bursting into any room and pummeling every object onto the floor is unacceptable human behavior. But for dragons, "acceptable behavior" is a whole different ball game. Dragons don't have to act decent in public because they're beasts, plain and simple. They can generate a gust of wind knocking down a crowd of people by flapping a single wing. They can breathe fire on their neighbor just because they feel like it. They can thrash their tail into a brick building creating devastating damage just because they've been slightly inconvenienced. Dragons are entitled to their fierceness. For us humans, it’s not that simple.

If we get angry, talking our issues out is the best way to solve any problem. We’re always told to “be the bigger person.” But wouldn’t it be nice to not be the bigger person? Wouldn't it be nice to act like a dragon whenever you feel the intense urge to unleash any pent up rage? Because of this green dragon costume for adults, you’ll be able to release all the fury you’ve been holding onto for all these years.

The soft green jumpsuit zips up in the front and gives wearers the appearance of a classic storybook dragon. The jumpsuit has an attached plush tail and a red circle, both featured in back. The included headpiece fastens under the chin completing the ferocious look. The next time someone aggravates you, go and get your dragon costume and pretend to breathe a healthy stream of fire on your antagonizer. It feels a lot more satisfying than talking through your issues like an adult!