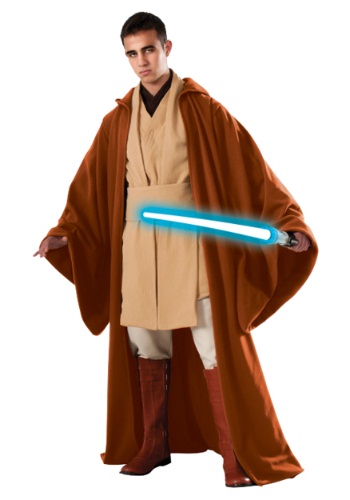 Patience. Use the force. Think.

Born on Stewjon, the young and Force-sensitive Obi-Wan Kenobi soon found his calling as a Padawan under the watchful eye of Qui-Gon Jinn. He was a quick learner, and he proved it by becoming the first Jedi in a millennium to defeat a Sith Lord in combat by turning Darth Maul into two pieces. (Darth Maul would come back a few years later, this time with robotic legs and a serious chip on his shoulder, but Obi-Wan beat him again.) He became a full-blown Jedi Knight during the Clone Wars, during which chaos he had to fight his own Padawan, Annakin. Obi-Wan’s experience and higher ground made Annakin no match for him, however, so Annakin lost that duel in the most painful way imaginable.

Like Darth Maul, Annakin would later come back a years later plus a few cyborg parts as Darth Vader in order to get a piece of Obi-Wan, but he did better of it than Maul during their second match. Even death doesn’t slow a war horse like Obi-Wan down, though -- it only made him more powerful than Vader could possibly imagine. That line ranks right up there with the most awesome things to tell someone right before he vaporizes you.

Our officially licensed Grand Heritage Obi-Wan Kenobi Costume is our most complete ensemble for Jedis who want to dress as their favorite master. It has the desert hermit’s hooded robe, tunic, pants, stole, collar piece, and even his lightsaber, so it’s all you’ll need to make a splash at the next convention or costume party. Remember to let the Jedi lifestyle come naturally -- don’t force it.