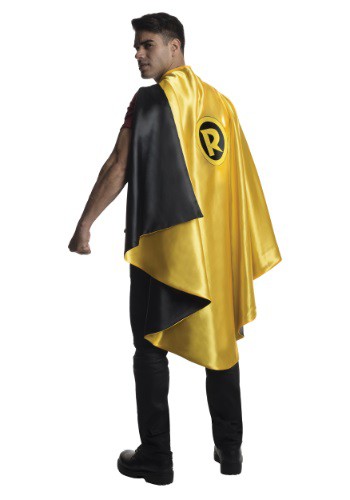 When anyone thinks of the protectors of Gotham City, the logical place to leap is right into the Batcave alongside the Dark Knight, himself, Batman.  But, we’re talking about a place where half the time the only place to hold all the crazed villains of the city is run by the villains themselves.  So, as much as Batman is among the best and brightest the world has to give, one man can’t do it all on his own!  Fortunately, he’s got support in the form of a sidekick who not only has developed side by side but has more than enough potential to become a true hero entirely his own!

Show the world where Nightwing started and don the vivid yellow to save Bat’s butt with this officially licensed Deluxe DC Robin Cape.  The polyester cape fastens with a comfortable Hook and Loop fastener strap on the neck band and features a bright yellow back and dark black lining to make for the perfect color scheme.  The embroidered R will remind everyone of those early days of the Dynamic Duo, especially those villains who’ll be begging to go back to Arkham!