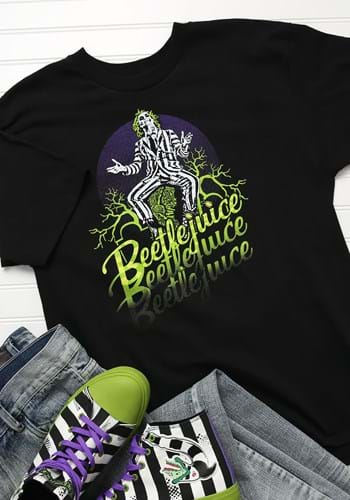 One second, you're having a nice dinner with friends. The next, a certain someone is running amok in your home and scaring the living daylights out of everyone he can get his grubby hands on! Well, that's what happens when you say HIS name 3 times in a row. The good news is that we don't think that applies to having his name written three times (perhaps even on a t-shirt). Hey, why don't test this little theory? We're going to write out his name three times, right here. Here goes nothing!

See, he didn't show! Nothing happened! That means this Beetlejuice t-shirt is totally safe to wear and we can guarantee that the ghost with the most won't show up on your doorstep if you wear it.

This adult Beetlejuice shirt comes officially licensed from the Tim Burton classic! It's made out of cotton and it has a colorful design on the front featuring the creepy ghoul himself. It also has his name written out, three times in a row. Just toss it on with your favorite pair of jeans and you'll be ready for a frightening look that comes straight from the 1980s.