Disney A Wrinkle In Time: A Daring Adventure Board Game 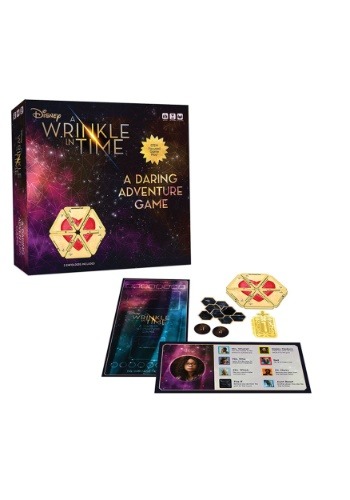 Where in the World is Mr. Murry?

Mr. Murry is in a real situation! While studying some astrophysics, he's gone missing. Of course, we can't have that, now can we? Now, it's up to you and a couple of to figure out where he's hidden. You get to take the role of Meg, Charles, or Calvin, who must all team up to solve mathematical messages and decode secret messages to uncover a way to reach Mr. Murry! All you need is this officially licensed board game to get started!

A Wrinkle in Time: A Daring Adventure Board game is officially licensed from the Disney movie and comes with plenty of unique game components. It comes with a board, 3 character boards, various cards needed for play, custom dice, a pair of Mrs. Who decoder glasses, and various tokens. It also comes with custom enfolders, which play a huge role in crafting your path to victory. Gameplay revolves on cooperative problem solving, making it an awesome way to help build teamwork skill! The gameplay takes around 45 minutes. Designed for ages 8 and older, it's a great game for any fan of the Disney movie or fans of the original book.