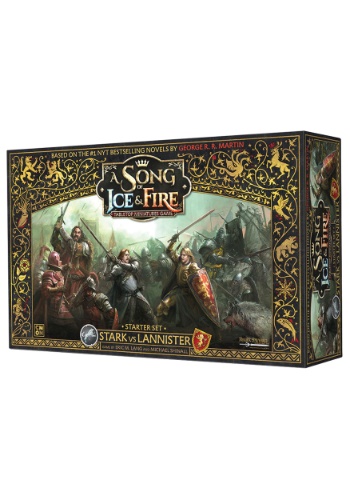 THE REAL GAME OF THRONES

We all knew from their very first interaction in the pages or on the screen that Game of Thrones was all about the Starks versus the Lannisters. Who shoves a kid out a window, especially when you have to know you're going to make a direwolf mad? It's time to let the two great houses end their frustrations for once and for all—Arya style in the Tabletop Miniature Game: A Song of Fire & Fire.

Take control of the epic two houses that make up the biggest tension of the entire series in this starter set for what could become a truly massive game. This edition includes all you'll need for two players to build their armies and take down threats in one of five different modes of play. As you gather more sets, you can grow from quick battles to full-scale wars. Each player chooses their commander and spends points to choose groups of guards, mercenaries, other named heroes, or even non-combat characters. It's a tactical choice to decide who will fight in your game. Take numerous different combat actions to conquer your opponents in simulated battles. Use the political influence board and maneuver your non-combat characters to give yourself mighty morale boosts or remove your opponent's resources. Beware, though! Just when you think you are prepared for anything, the Old Gods or White Walkers can throw everything into a panic!

TIME TO WRITE A NEW STORY

Did you feel a hard gut punch when you watched your favorite character fall in Game of Thrones? Well, it's time to bring them to victory, instead! Give the Red Wedding a happier ending, take vengeance, or see that the Lannisters do, indeed, pay back their debts in this tactical miniature board game.

$119.99
Item # AGDCOLSIF001  |       Write Review
Sale - Save 20%
Items Included
Product Highlights
Size Chart
ST
Inches Centimeters
Product Description
Product Reviews       Write A Review1 Review
Five Stars
By Current Customer / December 30, 2018
This is a solid game with a plethora of fun mechanics that are true to the world of Westeros. It is also far less expensive to get into than other tabletop miniature wargames.
Was this review helpful to you?YesNo
Write A Review
Select Mask to Review: